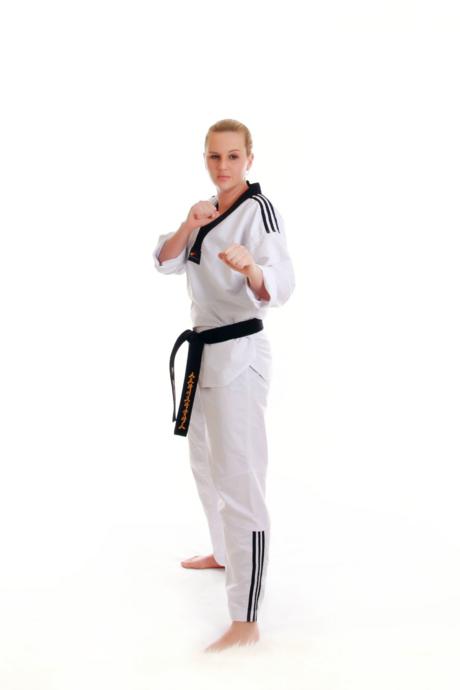 The 24 year old, who was already the National Champion in Taekwondo, is now also the international Karate Champion.

The weekend began with Bec, or Miss Bec as she is known to the many other students at Ballina and Alstonville’s Strike Martial Arts, winning second place in Koshiki Full Contact. “This is not a bad effort for the first time seeing as she didn’t even know the rules” joked her Instructor, Strike Martial Arts’ Master Shane Mckeahnie.

On day two, in front of 5000 spectators at Sydney’s Whitlam Leisure Centre Bec pulled out all stops to win first place in continuous sparring

“It was crazy” said Bec Washington. “They were some of the hardest fights of my life. The woman that I beat had twenty kgs on me. It’s completely different fighting to Taekwondo.

“It was really exciting to have Sir (Master Shane Mckeahnie) there with me, especially as we competed together. And to have my mum there to support me was pretty special. The first day was a really good experience. I didn’t really know the rules so we just had to go for it. The intensity was an indicator of what the next day was going to be like. To come and out win the continuous sparring was unreal. I had to pull on everything I have ever learnt and all my training over the past nine months to get me through to the finals.

The support I have received from my Coach Master Shane and all the people at Strike has been phenomenal”.

The Karate World Cup is held every three years and is attended by competitors from all over the world.

Bec Washington is now qualified to compete in the Australasian Titles for Karate in Sydney in November, followed by the national Taekwondo Championships in Adelaide in December followed by the Canadian Open and the US Open in January.